What is a sanctuary city?

There is a linguistic theory which holds that our vocabulary and our mode of thought are a form of feedback loop with one reinforcing or even altering the other over time, with that in mind, I want to talk to you about the notion of Sanctuary cities. About what they are and about what they aren’t. In general Sanctuary cities are cities which have (sometimes formally) recognized that local law enforcement cannot also be immigration police. That is to say that local and state police do not have the time, energy or resources to do citizenship checks on local residents without a compelling reason. In some cases this is due to a political conviction but in others, particularly where it had been an informal issue, it is something of a simple matter of practicality. If you have a large percentage of immigrant population the shear volume becomes prohibitive and how can one do so without resorting to a racial bias?

In the case of formal declarations of sanctuary cities the basic statement is a political one rather than a utilitarian one, although the former may simply evolve from the latter, lately this has been done in the face of Donald Trump’s executive orders which are considered by many to be ham-fisted and impractical. In these cases the city may refuse to honor ICE Detainer requests which are not the same as warrants issued by a judge, but rather are extra judicial requests which suspend basic defenses such as habeaus corpus or appeals even in the case of legal immigrant held on such detainers. Moreover when legal residents have been detained under such requests the federal government has left the local government holding the bag in terms of a law suit. (see Galarza v. Szalcyzk)

A further concern raised by police chiefs in municipalities with a high immigrant population is that these actions have the adverse affect of making immigrants less likely to come to the police with information, damaging the hard fought victories these departments have made in terms of building good relationships. Recently a woman was seized by ICE while at a courthouse while she filed a domestic assault charges and received a protective order. Since then four more women in that same district have dropped charges because ICE agents were staking out the courthouse. This is especially unnerving because there are U Visas which are specifically designed to help victims and witnesses in these cases.

“But,” I hear on a regular basis, “my Grandfather came over to this country legally why can’t they?” Well the short version is that if you are white there were no restrictions on your immigration to the US from 1790 until possibly 1903 and only if they were anarchists, epileptic, indigent or a pimp, moreover there isn’t even a federal standard for immigration forms or paperwork until 1906. It wasn’t until 1918 that restrictions were put on white immigration and even then only for political affiliation. An actual racial quota was put in place in 1924. In fact racial restrictions on immigration for non-whites were not lifted until 1952 when congress feared that we would be over run by too many Europeans fleeing to the united States. The panic at the time caused all immigrants to be thrown under the same bus.

At the time, Pat McCarran said, and which will no doubt sound familiar to anyone acquainted with the modern xenophobes of our time:

“I believe that this nation is the last hope of Western civilization and if this oasis of the world shall be overrun, perverted, contaminated or destroyed, then the last flickering light of humanity will be extinguished. I take no issue with those who would praise the contributions which have been made to our society by people of many races, of varied creeds and colors. … However, we have in the United States today hard-core, indigestible blocs which have not become integrated into the American way of life, but which, on the contrary are its deadly enemies. Today, as never before, untold millions are storming our gates for admission and those gates are cracking under the strain. The solution of the problems of Europe and Asia will not come through a transplanting of those problems en masse to the United States. … I do not intend to become prophetic, but if the enemies of this legislation succeed in riddling it to pieces, or in amending it beyond recognition, they will have contributed more to promote this nation’s downfall than any other group since we achieved our independence as a nation.”

Which brings me around to the final point: People have spoken of a broken immigration system and I find this to be completely untrue. The immigration system is working as designed. The problem is that the design is to make it as difficult as possible for “undesirables” seeking citizenship. Not because of a longing for security or safety but because of the vestiges of a colonial past, because of racial quotas. I dare anyone reading this find another example of racial quotas that conservatives can get behind. The quota system exists to this day by assigning visas on the basis of country of origin. which is why some places like the Philippines have people that have been waiting 24 years for a green card. That’s why Mexican’s without family already hear can wait 20 year.

To explain that math: 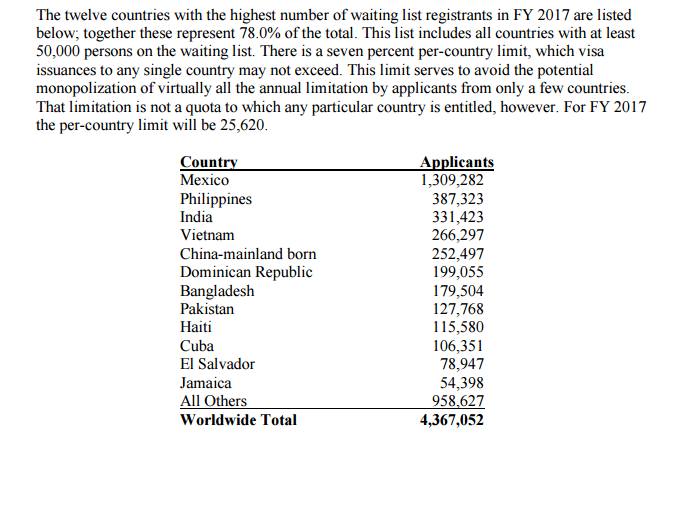 All of this is not to say that we shouldn’t have immigration laws or standards for admission but it is to say that when we look at the problem we should consider the whole problem. An obvious question for policy makers is why, given all the difficulties of being undocumented to people continue to enter the country that way? The answer lies right in that chart. By creating a quota system you create the bottleneck that denies the hope which lies at the heart of the American dream. While I may agree with the principals of sanctuary cities and I support them wholeheartedly it is a band-aid on the much larger problem of immigration reform which  must be addressed so that we can look people in the face honestly and say “If you obey the rules you are welcome.”, because until we change those rules we are marring the beauty of our country.

Thank you for reading this,