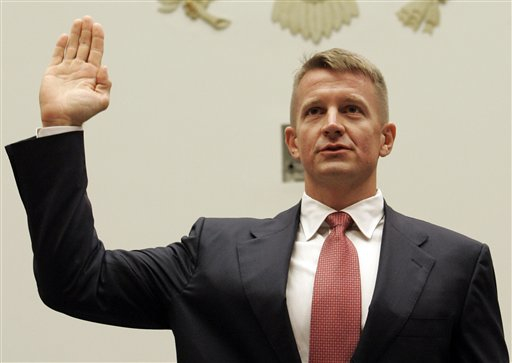 It has been reported that the United Arab Emirates organized a meeting between Erik Prince and a Putin confidante in January. Erik Prince believes he is waging a crusade against the Muslim world and is attempting to guide Trump along that path from the shadows. Prince has gone on record praising Putin as being large and in charge due to his fight against Islamic Fascism. He thinks that we should work with Putin because the main enemy is Islam.

He founded Blackwater, a Private Security Firm with vast connections to the CIA. His “troops” operated in Iraq without having to deal with the rules of engagement. This resulted in many civilian casualties and much controversy.  Afterwards, he fled to the U.A.E where he founded Frontier Services Group with the help of the Chinese Communist Party. He has helped numerous African governments suppress rebel movements.  He’s also trying to build a Private Air Force of modified crop dusters, and has had some moderate success in using them to bomb Libyan targets. He is also offering a private military solution to Europe’s migrant crisis.

Blackwater has since been renamed twice and is now known as Academi.  They’re owned by a holding Company named Constellis Group.  The chairman of the Constellis is Red McCombs (cofounder of Clear Channel)  Mccombs is also a mega-donor for Rick Perry, the new Secretary of Energy. Academi recently had mercenaries on the ground in Ukraine. They’re also working for the Saudi Government to fight in Yemen,

Rick Perry, was, until recently on the board of directors for Energy Transfer Partners. This is the company building the Dakota Access Pipeline, and they’ve hired a private security firm named Tigerswan Security. Tigerswan CEO is former Blackwater Employee James Reese. It should be of no surprise that Erik Prince donated $100k to the “Make America Number 1” PAC run by the Mercers, and thousands to Mike Pence who also views himself as a warrior for Biblical capitalism.”

View all posts by thetrumpwatchdog